Tennis courts can be divided into outdoor and indoor, with a variety of different course surfaces. It will be determined by economic factors. For example, lawn tennis is the most basic outdoor venue, but its cost of establishment and maintenance is too expensive, so it is replaced by an artificial stadium, which is cheaper and easier to maintain. There is also a clay court that is popular in Europe, which is the French Open.

The grass pitch is one of the oldest and most traditional venues. It is characterized by the small friction between the ball and the ground when landing, the rebound speed of the ball is fast, and the requirements for the player’s reaction, sensitivity, running speed and skill are very high. Therefore, the grassland is often regarded as the world of “offensive tennis”. The various Internet surfing tactics such as serving the Internet and surfing the Internet are almost regarded as the magic weapon for winning on the grass tennis court. The bottom line players are difficult to find on the grass tennis court. achievement. However, due to the high quality and specifications of grass courts, coupled with climate restrictions and expensive maintenance and maintenance, it is difficult to promote them all over the world. Every year, a few grassland professional tennis events are held on the British Isles, and the time is concentrated in June and July. The Wimbledon Championship is one of the oldest and most prestigious.

More precisely, the “soft course”, the most typical representative of which is the French tennis tournament at the clay court. In addition, various kinds of common sand, mud, and the like can be called soft sites. The characteristics of this kind of field are that the ball has a large friction with the ground when the ball is landing, and the ball speed is slow. The player has a lot of sliding space during the running, especially in the emergency stop, which determines the player must have the ratio. Better physical fitness, running and mobility on other venues, and a more tenacious will. It is a great test to play against the bottom line of the players in this kind of field. Players generally have to pay several times of sweat and patience to deal with the opponents at the bottom line. The winners are often not the fierce serve players. The party that struggles hard at the bottom line. 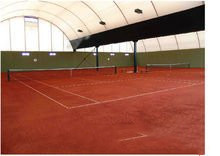 Most of the modern competitions are played on hard tennis courts and are the most common and common venues. Hard tennis courts are generally made of cement and asphalt. They are coated with red and green plastic surface layers. The surface is flat and high in hardness. The ball bounces very regularly, but the ball rebounds quickly. Many excellent tennis players believe that hard tennis is more “explosive” and that hard courts dominate the tennis game and must be given special attention. It should be noted that the site is harder than other textures, and the surface reaction is strong and stiff, so it is easy to cause damage to players, and this damage has cost a lot of good tennis players.

As the name implies, this is a “portable” roll-up tennis court with a plastic surface, a nylon woven surface, etc., which is usually bonded with a special glue to the asphalt, cement and concrete base with a certain strength and hardness. It can be used on the ground, and some can even be directly spread or bonded to any supporting ground. It is easy to roll, suitable for transportation and has very strong adaptability. It can be used indoors or outdoors and even on the roof. The speed of the ball depends on the flatness of the surface of the site and the roughness of the carpet surface. This kind of site is also very simple to maintain, as long as the floor is clean, no damage, no water accumulation (for matching with the corresponding drainage facilities).